Book Review – The Elephant in the Brain 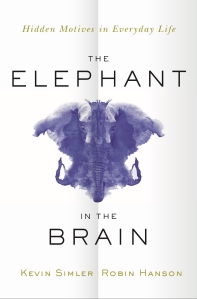 Like many, I’m on a learning journey with behavioural economics.

I try and keep up with the popular literature, follow what opinion formers are saying, and bring frameworks into my daily practice. Behavioural economics has shown us the power of our evolutionary heritage: its more nuanced account of human rationality has overwritten homo economicus, the Spock-like model which preceded it.

But just when I feel I’m making progress, pop. I start reading about “an important addition to the field of behavioural economics” which is opening up a new frontier in human understanding: evolutionary psychology. And I’m thinking: FFS! Is that another summer of reading? I was looking forward to the next Jack Reacher thriller.

Kevin Simler & Robin Hanson’s The elephant in the brain is about unconscious motivations in everyday life. It’s newly published & Ogilvy recommended. What’s apparent, reading it is that evolutionary psychology helps to reframe familiar questions, making them appear in a new light.

What follows is an potted overview of their arguments and some questions that spring to mind.

“This book attempts to shine light on those dark, unexamined social institutions in which almost all participants are strategically self-deceived, markets in which both buyers and sellers pretend to transact one thing while covertly transacting another. The art scene for example, isn’t just about appreciating beauty; it also functions as an excuse to affiliate with impressive people and as a sexual display (a way to hobnob and get laid). Education isn’t just about learning, it is also about getting graded, ranked and credentialled, stamped for the approval of employers. Religion isn’t just about private belief in God or the afterlife, but about conspicuous public professing of belief that help bond groups together.”

In this analysis, we are self-interested and self-deceived. What they call the elephant in the brain “is an introspective blind spot that makes it hard to think clearly about ourselves and the explanations for our behaviour.”

Involvement in our institutions is driven by competitive signalling

“Our institutions do ending up actioning many of their official, stated goals, but they’re often inefficient because they are simultaneously  serving purposes no-one is eager to acknowledge.”

Our evolutionary heritage is responsible for this. In the hunter-gatherer era your survival was down to cooperation: if you were ostracised from your peer group you would die. Norms like fairness and egalitarianism emerged from this period. Crucially our brains evolved to get ahead socially, even if that meant being devious:

“Human beings are a species that is not only capable of acting on hidden motives – we’re designed to do it. Our brains are built to act in self-interest while at the same time trying to appear unselfish in front of other people. And in order to throw them off the trail, our brains often keep “us”, our unconscious minds, in the dark. The less we know of our ugly motives, the easier it is to hide from others. Self-deception is therefore strategic, used by our brains to look good while behaving badly. The best way to convince other that we believe something is to actually believe it…”

Signalling is the book’s key concept. Simler & Hanson define it as “anything used to communicate or convey information.”

“There are good reasons to believe that our capabilities for visual art, music, storytelling and humour function in a large part as elaborate mating displays, not unlike the peacock’s tail.”

Theirs is a fundamentalist interpretation of signalling theory. Buying art says to the world: I’m so confident in my survival that I can afford to waste resources. Like the peacock’s tail it advertises a survival surplus: the easy assurance of an animal with more resources than they know what to do with.

In their eyes, we’re unaware of the signalling motive in our purchase decisions. They go further: riffing on Veblen’s concept conspicuous consumption they argue the very notion of individuality is a con-trick we play on ourselves:

“We’re locked in a game of competitive signalling… no matter how much the economy grows there remains a limited supply of sex and social status – and earning and spending money are  good way to compete for it.”

Readers may find the chapter on religion most contentious

Belief is a symptom of the underlying social incentives:

“We worship and believe because it helps us as social creatures. Religion is a team sport – communal practices resulting in a highly cohesive and cooperative social group…”

We signal loyalty to this in group to gain allies, comrades who could help us in the future. Having skin in the game enables trust:

“…sacrifices of time and effort implicitly show loyalty to you and congregants…Acceptance can make the difference between the warm embrace of fellowship and the cold shoulder of ostracism. These are powerful incentives to believe.”

The effort is the point here: it buys you access to the club. Social status is the prize.

The purpose of politics to express loyalty to a tribe

In their analysis, the purpose of politics is not to lobby and effect change. We don’t act rationally, undertaking a detailed policy analysis then picking a side ahead of an election. Terrorist groups don’t disband when they achieve their stated aims. Politics is about tribal loyalty and badges help us sort others into those with or against us:

“As arguments these slogans (‘black lives matter’ or ‘guns don’t kill people, people do’) radically oversimplify the issues – but as badges, they work great.”

If we misunderstand our own motives to this degree there are troubling implications. Does it trivialise our efforts? Do we just find ourselves in an arena (business, academia, art) and start playing? Do we just want to belong to something, anything, competing to develop social bonds in order to feel worthwhile? Does queuing overnight outside the Apple store or putting on a Corbyn badge amount to the same thing?

It would be easy to overextend these arguments. Distal explanations for behaviour work when the level of analysis is the species; proximate explanations for individuals are more problematic – and risk being accused of being reductive and unfalsifiable. As zoologist John Krebs said in 2014“Biology is not pure, not simple – it is not physics!…there are huge cultural overlays to behaviour.”

Things I’ll be thinking about

Postscript: how about sport?

To an outsider there isn’t much to separate rugby union or rugby league: it’s scrum pass tackle and ruck. Yet the audience for each code doesn’t really overlap. Seeing poetry in an 8 man scrum and barbarity in “M62 rugby” is about geography, identity.

Competing to show loyalty to your team takes many forms.

1 Response to Book Review – The Elephant in the Brain

The Mystery & Meaning of Money

An ongoing quest for wisdom

Strangers on the Shore